R-Motorsport signed of the blue riband enduro career of the Aston Martin V12 Vantage GT3 with a team performance that almost delivered a famous win in one of the most challenging GT races worldwide with a driving squad of three Bathurst rookies and the oldest GT3 design on the grid.

After claiming the pole position on Saturday, only to see a pair of penalties dealt to push the number 62 car down to start 12th on the grid, the team battled hard to bring the car to the front of the race, Marvin Kirchhöfer starting in full darkness and handing the car over safely to Matthieu Vaxiviere, and then to Jake Dennis.

Throughout the 12 hours, which with limited incident set a new distance record, the #62 was always on the lead lap and always in contention, deep into the final hour the driving trio, and great pit work and race strategy, had left the car with a healthy lead after well over three hours of consecutive green flag running.

With around 30 minutes to go though, a Safety Car scrambled to allow recovery of a stranded car, bunched up the leading pack, Dennis left to get his head down and go for the finish.

His pace was enough to open a gap on the pack of chasing contenders but the last ten minutes would prove to be a tough test for a car that was on older rubber, and on rather tired brakes than a pursuing Porsche.

The battle looked one-sided until the Porsche got onto terms with the number 62 but Dennis fought hard, used the straight line strength of the V12 Aston, and some fine defensive moves, to make it very tough indeed for his pursuer, tough enough the other driver needed a robust move to make a pass that seemed unfeasible otherwise at Forest Elbow.

Even then the challenge wasn’t over, the Aston Martin Vantage staying close enough to take advantage of any mistake ahead - Sadly for R Motorsport none would come but they would finish the race in a fine second place just three seconds back, well ahead of a spirited battle for third. It would be Aston Martin’s best ever finish at the race.

"It’s a mark of just how well that went that a crew of Bathurst rookies is actually feeling disappointed with second place. We pushed hard all day and kept the car in the hunt, the team effort was huge, we always knew there were teams with experienced drivers here, and newer cars, that would bring a big challenge.
Our speed though was good all day and I’m pretty sure that if we hadn’t had the late Safety Car we could have brought home the win.
By the end the brakes were just about finished, it was a shame to lose the lead to a move, but after that all I could do was stay close and hope for another opportunity.
This place, and this race though are amazing, we’ll be back I’m sure - now though we are all looking forward to the new car, and to taking on the Blancpain Endurance Championship." 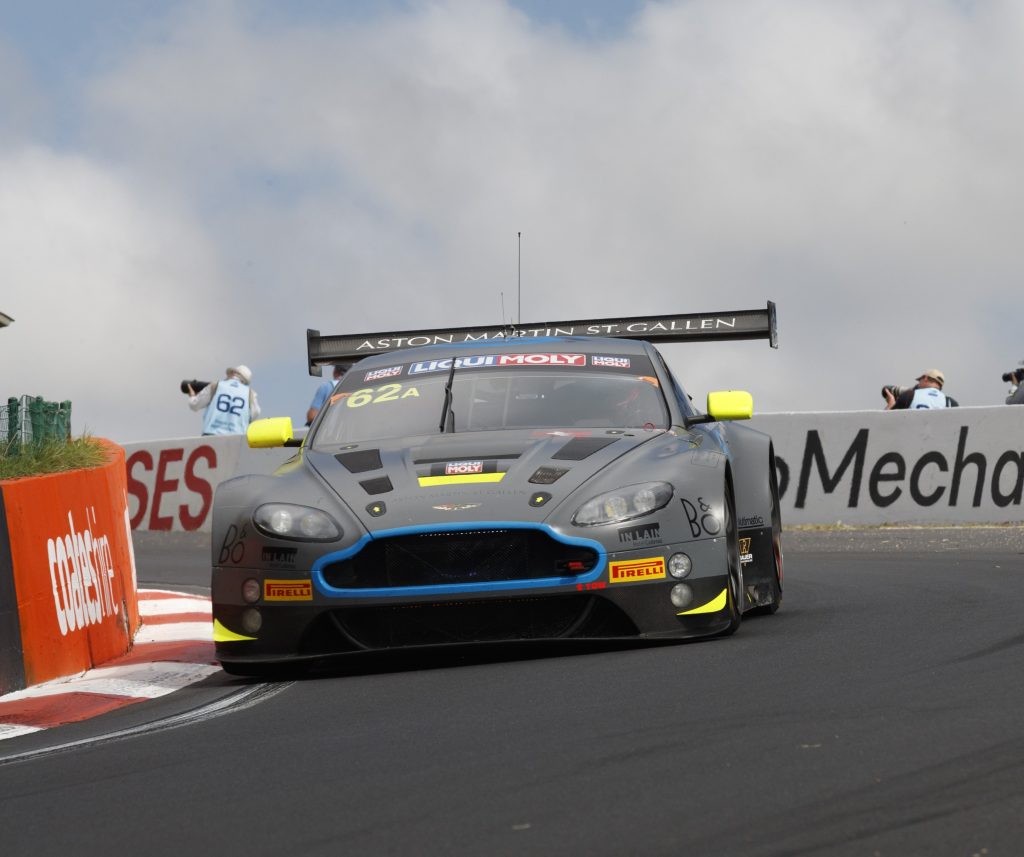