Jake Dennis claimed his second Formula 3 European Championship win of the day in a frantic, incident-packed race two at Pau this afternoon.

Jake Dennis claimed his second Formula 3 European Championship win of the day in a frantic, incident-packed race two at Pau this afternoon.

The RSF driver took three safety car periods, a red flag and a restart behind a fourth in his stride to lead from start to finish. In a virtual repeat of the day's first race, Dennis led the pack away from pole while his front row partner Charles Leclerc fluffed his start for a second time.

This time it was Maximilian Gunther who took advantage, leaving the Frenchman to fend off Antonio Giovinazzi while Dennis set about opening up a gap.That was soon neutralised by the first safety car which appeared at the end of lap two after Matt Solomon ploughed into the barriers.

When racing resumed Dennis quickly reaffirmed his superiority, opening up a 3.5 second gap at the head of the field over the following 12 laps. But once again his hard work was undone by a second safety car necessitated by the stranded car of Julio Moreno. The short interruption was followed within a lap by a third when Alessio Lorandi pitched Michele Beretta into a spin.

Come the restart Leclerc, who had harassed Gunther throughout, seized the opportunity to snatch second on the exit from La Gare when the German ran wide.

The error let Giovinazzi in on the act too with the pair racing side by side on the run to the Lycee hairpin where the Italian dived down the inside to chase after Leclerc.

The tussle left Gunther stuck in the barrier where a traffic jam built up as the rest of the field tripped over one another in a bid to squeeze through. The chaos brought out the red flags.

When the race resumed with six minutes to go -behind the ubiquitous safety car - Dennis set about rebuilding a lead for the fourth and final time rapidly pulling out a gap of almost two seconds on Leclerc before easing off over the final lap.

By the chequered flag the pair was separated by six-tenths of a second with Giovinazzi finishing a further two seconds behind.

"A perfect end to a perfect day," said Dennis afterwards. "The safety cars made it difficult again but I wasn't under quite the same pressure.

"The gap to Gunther, before he went off, was a bit bigger, which made it easier to manage. Then over the final short stint I was able to build a gap again which meant I could back off a bit on the final lap." 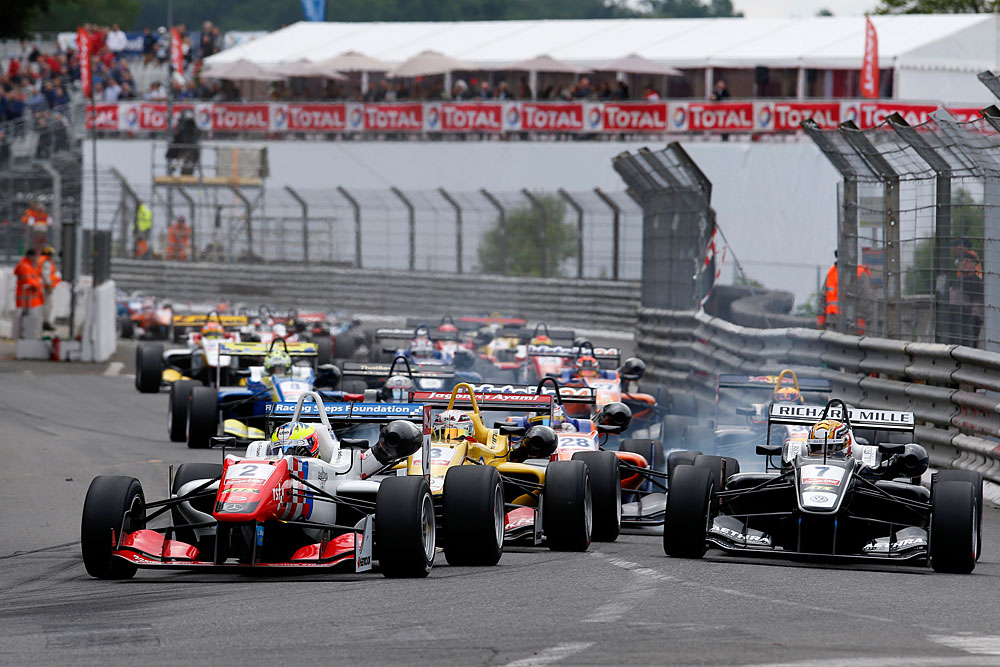